Hanoi, Mar.14 (APD) – Many Indian billionaires have registered to hold their weddings in Phu Quoc Island in Vietnam’s southern province of Kien Giang for 2019 and the following year.

The bookings come after the first wedding of an Indian billionaire couple on the island, which boasts one of the world’s most idyllic beaches and romantic sunsets. The ceremony took place from March 3-10. 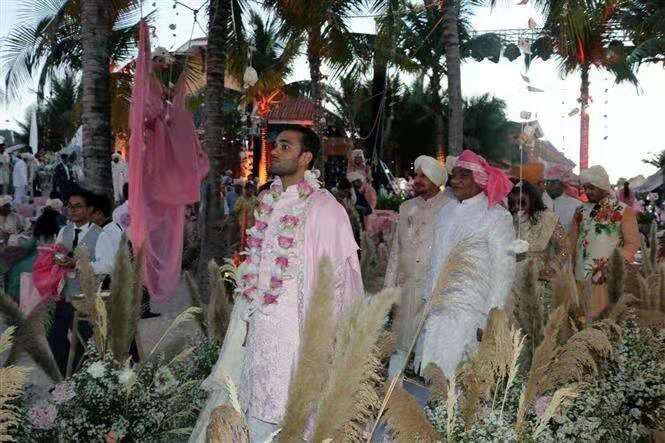 Bride Kaabia Grewal and groom Rushang Shah chose Phu Quoc as the venue to tie the knot after studying the island’s beauty during an India visit by leaders of Kien Giang province in late 2018 to promote the island’s tourism.

Eleven main events were held during the week-long ceremony, with the most important rituals taking placing at the luxurious JW Marriott hotel in Phu Quoc from March 7-10.

A theme was chosen for each day with specific dress codes for guests to follow, while a wide range of recreational activities, including a running race, lantern making, painting of hats, music performances and theatric opera singing were available for guests.

On March 9 evening, an official marriage ceremony, including a 60-minute prayer was held, following Indian traditional practices. Subsequently, a wedding banquet was served in a space lit with flickering candles and decorated with roses.

As many as 700 wedding guests, including many celebrities, were served with cuisine from different countries, India, Europe, Vietnam and Japan. Desserts included Kulfi (an Indian frozen dairy dessert) and Besan Ka Seera (an Indian sweet dish made with chickpeas flour).

The event organizer, Indian-based Horizon company, said that around 225 people from 10 different countries had flown to Phu Quoc to serve the wedding. They included 30 people in charge of fashion, makeup, hairstyling and venue decorations.

Nearly 150 artists including musicians, DJs, singers, dancers and opera singers from Italy, the US, Thailand, the UK, Switzerland, India and Vietnam took turns performing for the extravagant event.

Bride Kaabia Grewal and groom Rushang Shah are wellknown in the Indian upper class. Kaabia Grewal is a designer and co-founder of Outhouse, one of India’s leading bridge jewellery houses. Its products are worn by style icons and film stars in India like Sonam Kapoor, Priyanka Chopra as well as global names like Sienna Miller and Tyra Banks.

Kaabie Grewal and her sister won the Vogue Fashion Fund in 2015 and have been featured in the Forbes India 30 under 30 list in 2016.

Groom Rushang Shah is an established name in Mumbai, with his company offering security services to leading businesspeople and politicians.

According to Nguyen Viet Thong, Director of the Kien Giang Department of External Affairs, said provincial authorities had made all efforts to facilitate the wedding ceremony – the first of its kind ever held on Phu Quoc Island.

The couple’s 700 wedding guests as well as metric tonnes of goods, clothes and equipment were easily cleared for entrance into Phu Quoc thanks to good coordination from different government bodies, he said.

The event was an opportunity for the Mekong Delta province to promote wedding party tourism, he stressed.

A representative from Sun Group, developer of the JW Marriott hotel, said the hotel had successfully organised weddings for high-profile couples in the past, but a week-long Indian wedding was unprecedented.

Located in the Gulf of Thailand and 46km from the mainland, Phu Quoc is the largest island in Vietnam with a total area of 574 square kilometers and a population of more than 100,000. It is famous for pristine beaches, pearl farming, fish sauce, pepper and “ruou sim”, a wine made from sim fruit or Rose Myrtle.

Besides taking a two-hour boat ride, visitors can also arrive in the island by air, with the Phu Quoc International Airport hosting direct flights from many destinations in Asia and Europe.

From March 2014, Vietnam has implemented a visa-free policy for all foreign visitors to Phu Quoc for a period of up to 30 days.

In 2018, the island welcomed more than 4 million tourists, a year-on-year rise of some 36 percent.