Editor's note: Barry He is a London-based freelance columnist. The article reflects the author's opinions and not necessarily the views of CGTN.

Alibaba's e-commerce ambitions are becoming increasingly international, aiming to ship products from China to anywhere in the world in just 72 hours. Already the service is starting to win over many European consumers, where the Chinese brand in the last few months has increased in notoriety.

Such markets traditionally may have ordered from Amazon instead and so competition is fierce and expectations high. In this cut throat race where time is of the essence, it is the latest warehouse technologies which should be adopted to win this delivery battle.

E-commerce is already the biggest driver in the advancement of mobile robot technology, with Chinese warehouses being home to the largest populations of such AGVs (automated guided vehicles) in the country. Such robots are responsible for moving goods around and are capable of connecting to the internet via Wi-Fi along with self-charging features. Working for up to eight hours on a single charge, when they run low on energy the metallic workers are able to find a plug socket independently.

The power of this innovation allowing these robots to work autonomously cannot be understated, as a competitive industry worth hundreds of billions of yuan commands a constantly reliable gargantuan output. Each robot can travel over a meter per second and can carry up to 600 kilograms at a time. In this industry, to stand still is to move back.

This method of using robots to sort through items and process them at a much higher rate than human workers hold obvious advantages, although challenges do exist with the technology still being in its relative infancy. Ensuring that robot collisions are reduced to a minimum would streamline efficiency for warehouses looking to maintain a competitive output.

This, however, is becoming increasingly difficult as hundreds of robots fly around a limited space in a complex arrangement of crossed predetermined pathways. Computationally, commanding each member of an AGV fleet to avoid each other is difficult and exponentially so the larger the fleet gets.

Optimizing efficiency and minimizing congestion is paramount, and resources must be invested into new forms of sensors and AI programming to ensure that warehouse traffic incidents do not occur. Experimental computational algorithms which allow each robot to decide the priority of items based on their monetary value to determine rights of way, are currently in development. 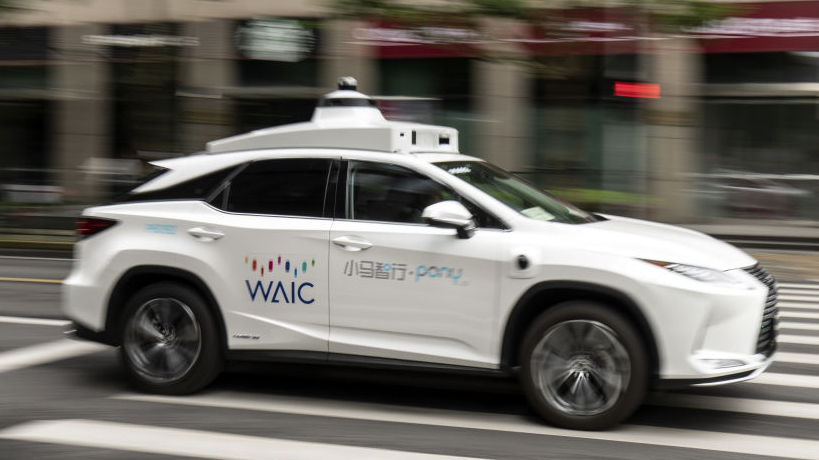 A Pony.ai Inc. autonomous vehicle with the branding of the World Artificial Intelligence Conference (WAIC) travels along a road in Shanghai, China, July 8, 2021. /Getty

The self-driving car revolution set to take place in the coming years too will also affect how products are delivered directly to consumers. By making logistics autonomous, operations will become more efficient and cost effective. Bringing these vehicles onto public roads will be the next step, and e-commerce giants will be primed to make this jump first given their established history of using them in controlled environments.

Warehouse machinery as well as delivery options are not limited to the ground. Within the next 10 years we will also see a marked increase in the adoption of warehouse drone workers too, aerial robots which are able to scan hard to reach barcodes or navigate floorplans safely out of the way of congestion below.

Many experts believe that such vehicles could reduce the need for large, spacious and potentially dangerous equipment such as forklift trucks. These are prone to human error and are a major source of workplace injuries, especially so when drivers are stepping down and leaving the vehicle.

The men and women who still work in warehouses and factories are not left behind by new robotic innovation. The advent of wearable technologies such as smart glasses is also being integrated into supply chains, meaning that e-commerce platforms wanting to keep up with the herd should take notice.

Such devices are extremely powerful and enable users to augment product information and equipment status within their visual reality. This will lead to large improvements to existing processes such as quality checking operations or providing remote assistance to workers not in their direct vicinity.

Embracing these new technologies will be vital to maintain competitive warehouse operations that have shorter lead times and fast turnarounds in China's formidable e-commerce landscape. Accuracy and speed will continue to be timeless limiting factors when it comes to delivering items with optimum levels of efficiency.

Merely maintaining current output levels will not even be near enough to keep company's heads above the water, as the rate of development in e-commerce shifts so rapidly in response to new disruptive technologies. Not integrating the latest devices and attitudes will mean that even successful e-commerce platforms will be left in the dust.