Editor's note: Djoomart Otorbaev is the former Prime Minister of the Kyrgyz Republic, a distinguished professor of the Belt and Road School of Beijing Normal University, and a member of Nizami Ganjavi International Center. The article reflects the author's views and not necessarily those of CGTN.

These days, perhaps two of the most referenced words in media are Afghanistan and the Taliban. Even though Afghanistan is far from the main centers of world politics and economics, and the Taliban never intended to expand their activities outside the country. The closest neighbors of Afghanistan – Central Asia, China, Iran, Pakistan, Russia, and India show particular concern. Such attention to the Taliban is because it was this movement that won its 20-year war with the U.S., the country with the strongest army and immense financial capabilities, which spent more than $2.2 trillion on this war.

It is the issue of stabilizing the situation in Afghanistan that will become one of the main discussion points at the high-level international conference "Central and South Asia: Regional Connectivity. Challenges and Opportunities," to be held on July 15-16 in Tashkent.

Recently, the U.S. intelligence community concluded that the Afghan government could collapse within six months after the U.S. completes its withdrawal from the country.

A report released in early June by the UN Afghanistan Sanctions Monitoring Team argues that the Taliban exercise direct control over more than half of the country's regional administrative centers while controlling up to around 70 percent of the territory outside urban areas. Taliban officials say their fighters have taken control of 85 percent of Afghanistan – a claim impossible to verify, and disputed by the government.

Dramatic events erupt in the north of the country, far from the main Taliban-controlled territories in southern Afghanistan. Fierce gunfire is already under way three hours from the capital of Tajikistan, Dushanbe. Experts believe that the full-scale exit of the Taliban to the Panj River dividing Afghanistan with Uzbekistan and Tajikistan following the Anglo-Russian agreement of the late 19th century will take place within just a few weeks. A significant risk is that such a development could lead to a large flow of refugees from Afghanistan to Central Asia and Russia.

Russia is seriously concerned about the possible destabilization of the situation in the countries of Central Asia. Russian Defense Minister Sergei Shoigu recently said: "By the end of this year, the command of the Central Military District will have to re-equip two aviation regiments with modernized Su-34M fighter-bombers and MiG-31BM fighter-interceptors." In early July, there was another visit of the delegation of the political office of the Taliban movement to Moscow. They came in January of this year, in May 2019, and earlier. On July 9, the Russian president's press secretary, Dmitry Peskov, mentioned that "contacts [with the Taliban] are necessary against the background of the tense situation in Afghanistan."

China fears that the withdrawal of U.S. troops from neighboring Afghanistan could increase instability in Central Asia. The collapse of state institutions in Afghanistan can lead to the growth of three evils – terrorism, separatism, and religious extremism. 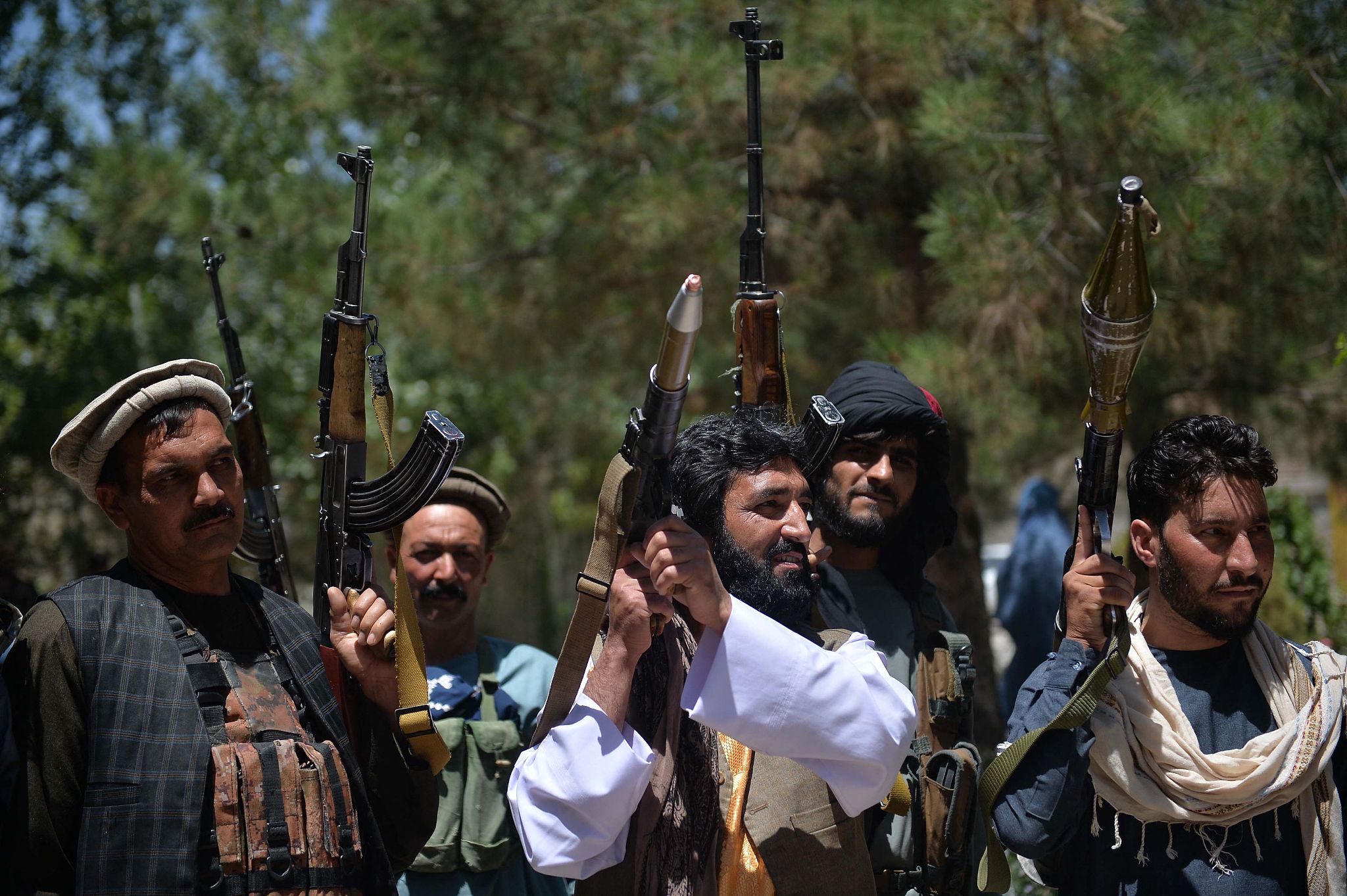 People gather with their heavy weapons to support Afghanistan security forces against the Taliban, in Guzara district, Herat province, on June 23, 2021. /CFP

Before leaving for Washington at the end of June, the Minister of Foreign Affairs of Uzbekistan Abdulaziz Kamilov gave an interview to the American TV presenter Dennis Wholey. He spoke about the development of events in Afghanistan, stressing that the fundamental provisions of Uzbekistan's position have been agreed with the leadership of all Central Asian states.

The minister made it clear that this problem of Afghanistan should be resolved only by the Afghans themselves based on a mutual compromise between the current government and the military opposition – the Taliban and others. When asked what the Taliban wanted, the Uzbek foreign minister answered with a smile: "First of all, the Taliban wants the [U.S.] troops to withdraw."

In my opinion, the most fundamental was the minister's statement that Afghanistan should become an integrated part of the Central Asian region. It was about reconstructing the "Greater Central Asia," an area that existed as a single whole for centuries, during the Great Silk Road. Along all the years of the Golden Age of Central Asia (1100–1600AD), the region was a world leader in economic development, trade, technology, manufacturing, and intellectual life.

That can help form a common strategy, unite the positions of different countries, and bring Russia's, China's, and the U.S. positions closer together, primarily in the region, and then, possibly, in other parts of the world. Paradoxical as it may seem, Afghanistan can become a place for effective interaction of various global players to build an atmosphere of trust, bring different positions closer through the negotiations, and build a more predictable future – and not only in the Central Asian region.